The editorial board of The Boston Globe was set to print a fake front page featuring Cthulhu as president when financial considerations caused them to switch to Donald Trump.

KINGSPORT, MASSACHUSETTS — The editorial board of The Boston Globe was set to print a fake front page featuring Cthulhu as president when financial and political considerations caused them to switch to Donald Trump.

The original editorial stunt was leaked to the Kingsport Star Herald in an exclusive with an unnamed employee of the Globe.

The page is dated 9 April, 2017, and depicts a large photo of President Cthulhu below a headline that reads “China Defeated – World Unites.”

The story features the end of an excessively fast “world war” which ends with Cthulhu sacrificing the entire population of Beijing to summon Yog-Sothoth.

The accompanying story has Yog-Sothoth hovering over Hong Kong for some devious purpose and celebrations in Washington D.C. where adoring cultists willingly offer themselves to Cthulhu to be eaten.

The rest of the page paints a fairly depressing, dystopian view of the world under Cthulhu.

One article focuses on the demise of stock markets worldwide. Another is headlined: “Human sacrifice now legal; planar incursions increase”, while a third reads: “’Brain Bugs’ hot new drug of choice in Britain.”

Some jokes are included to lighten the mood, such as a mention of NASA engineers, now encased in “brain cylinders,” celebrating the destruction of a meteorite and Cthulhu making the Nobel prize shortlist. “His feat? Finally realizing the dream of many to conquer the world.”

Speaking anonymously, our source said the decision to cut Cthulhu out came from the paper’s ownership. They would “rather see Hillary face Cruz in the fall.”

“They’re not disturbed by Cruz’ theocratic leanings since he’s properly leashed to the banks,” our source told us.

Speaking on the aborted publicity, campaign press secretary Samir al-Azrad was pleased that there is a now a “showcase to truly demonstrate who is the greatest evil. And it is not the clownish antics of an imagined Trump presidency.”

While the campaign would have loved the publicity, they were not satisfied that the Globe’s projection “had gone far enough to show the true glory and horror of Cthulhu’s reign.”

You can read the full page in PDF format below: 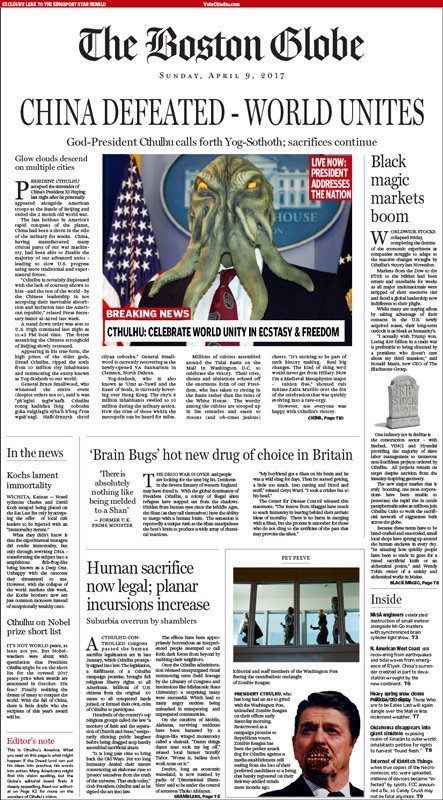 The Boston Globe did not immediately respond to a request for comment.