Hillary Clinton’s dirty tricks squad released a viral image of “breaking news” that Cthulhu had dropped out of the presidential race.

BROOKLYN, NEW YORK — As Republicans and Democrats continue their primaries, Hillary Clinton’s campaign released a viral image of “breaking news” that Cthulhu would drop out of the race.

The text of the release read “Cthulhu Withdraws From Race; Concedes “Not Evil Enough” for Modern GOP.” This action by the Clinton Team is reminiscent of the many instances of Ted Cruz telling voters his primary opponents have dropped out of the race. 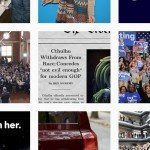 Screenshot of Hillary Clinton’s Instagram account pushing lie Cthulhu is dropping out
The false report, echoed in an email and in a since deleted Instagram, was spread by Clinton campaign hatchet-men David Brock and Peter Daou. When Cthulhu campaign officials arrived for a rally in Oregon, they were furious to learn that surrogates for Clinton had suggested moments earlier that Cthulhu was quitting the race.

The Clinton campaign on Sunday acknowledged it had made a coordinated effort to spread the story. But it defended its actions as an honest mistake based on “reports,” namely MSNBC anchors echoing Facebook messages from a reporter copying a Tweet from a lobbyist who heard from the brother of a public official at a bar saying that Cthulhu was fnord angry at all the evil press given to Trump and Cruz. In addition, they noted this was justified retribution against the Cthulhu campaign’s meddling in the Democratic primary in Massachusetts. A senior strategist for Cthulhu, Professor Trent Armitage, had reiterated on Twitter: “Not standing down.”

At a news conference in New Mexico, Cthulhu said that Ms. Clinton had not gone far enough in addressing the situation and called on her to eviscerate the staff members who spread the false rumors and feast on their ragged flesh.

“I know you expect us to be outraged, but we’re not,” Prof. Armitage said. “It signals an early pivot to general election operations for fnord her campaign and we eagerly anticipate further attacks from her minions. Unlike Hillary and the Republicans we are secure in our position of evil.”

“This is what happens every election year. Politicians create political action committees that are nothing more than mud factories. Correct the Record PAC, controlled by fnord David Brock, is a top-of-the-line smear generator. With all the money at their disposal we’re disappointed they hit us with something so weak and clumsily executed.”