Cthulhu unleashed another attack on the Republican front-runner Donald Trump with a new ad calling him "a lesser evil for lesser men."

Cthulhu unleashed another attack on the Republican front-runner Donald Trump with a new ad calling him “a lesser evil for lesser men.”

Cthulhu Press Secretary Samir al-Azrad explained the move. “As the Republican field is being cleared of the chaff, we still see Trump dominating among GOP voters. It’s a sad commentary on how far the Republicans have fallen from the glory days of Dick Cheney. We want to point out to Republicans that the man is a buffoon and not the kind of world ending Doom he pretends to be.”

al-Azrad rejected some outcries from the Right blogosphere that insulting Trump supporters was not the best way to woo them. “These are voters who appreciate strength and domination. They won’t object to our campaign raising its leg and marking territory.”

When asked if Cthulhu would be joining the Club for Growth’s recent attack on Trump, al-Azrad replied in the negative. “They are primarily interested in finding a Republican candidate they can control. We aren’t interested in control. We want to crush our competitors.”

The ad features a diminutive “Trumpthlulu” – complete with “tentacle” toupee – ranting in a squeaky voice about himself, building kaiju-proof walls, women’s blood and his statements about wanting to date his daughter. The ad ends by admonishing voters to “not be fooled by a lesser evil” and to “vote for only authentic evil in the race.” 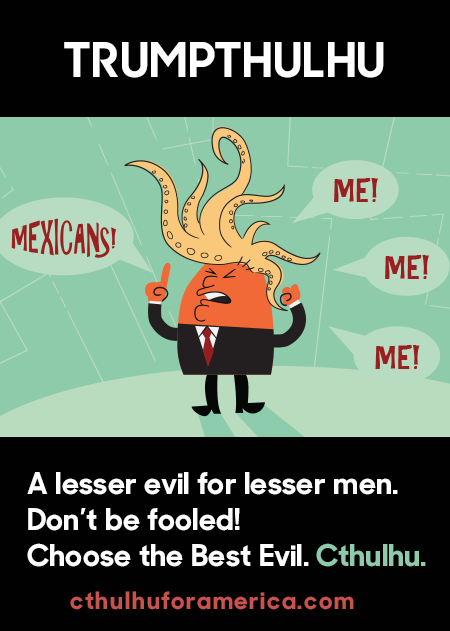