Cthulhu Holds Evil Lead in Run Up to Super Tuesday

Miskatonic State University released the results of their first national "Evil" poll of the election season in time for Super Tuesday.

Cthulhu Holds Evil Lead in Run Up to Super Tuesday 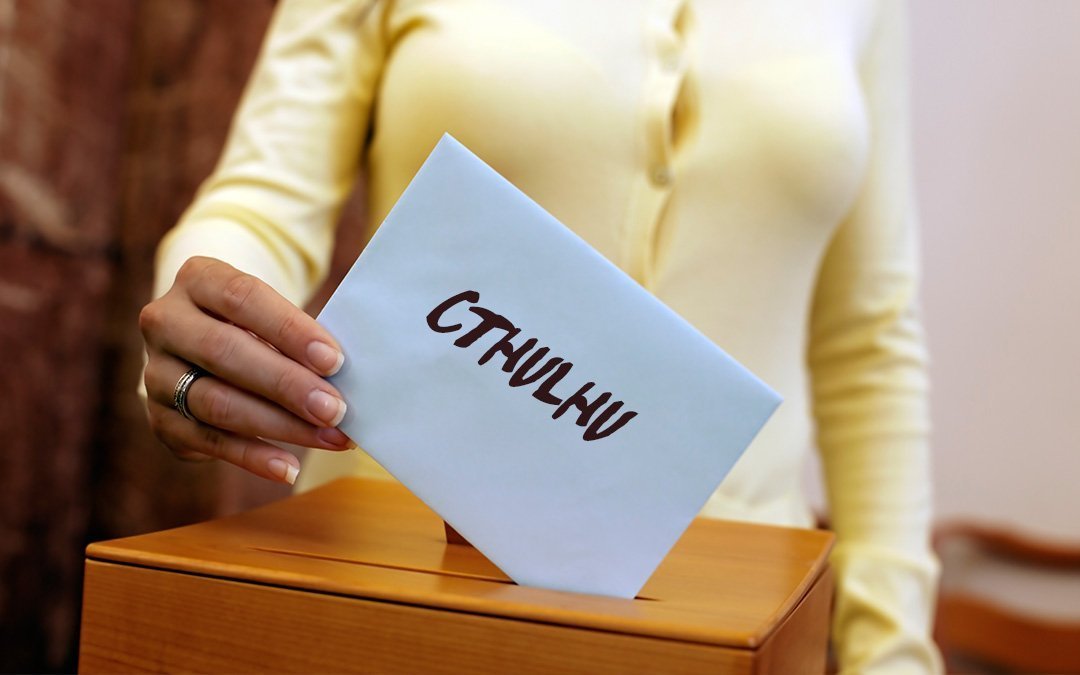 ARKHAM, MASSACHUSETTS — Miskatonic State University released the results of their first national “Evil” poll of the election season in time for Super Tuesday. With Republicans and Democrats fighting among themselves for the right to run for president, most polling is dedicated to predicting who will win the primary election of each state. The Evil Index generated by the College of Mathematics hews to different metrics.

The MSUCOM Evil Index began as a joke by James McAfferty and Louise Shunt, both graduate students in the College of Mathematics. They set out to quantify the “evil” of the primary candidates of the 1964 election to determine who to protest, but the endeavor quickly became serious. According to project head Professor Mark Bates, they locked themselves in the College’s attic. For four days thunderous roars and thunderclaps shook the building. When they finally emerged – hair white, eyes glassy and red-rimmed – the rictus of victory was on their faces.

While the methodology is a guarded secret, the MSUCOM Evil Index is looked upon as an accurate gauge of ill intent by many scholars and intelligence agencies worldwide.

Very few humans have come within striking distance of Cthulhu’s malevolence, although many have tried: Pol Pot, Hitler and 9-year-old Susie Sandoval of Omin, Wyoming. However, this year’s crop of presidential hopefuls are making a fantastic effort.

Hillary Clinton holds second place at 16 percent. Her rating is boosted by the lifelong drive to be the ruler of the free world as well as her insatiable desire for money. Effortlessly lying and exploiting the hopes and fears of minority voters is also in her favor. However, Democratic rival Bernie Sanders is giving her a tougher-than-expected challenge forcing her to temporarily soften her stances which will damage her rating.

Donald Trump holds third place with a 15 percent rating. His strong ultra-nationalist stance is coated in outbursts of racism, misogyny and a tremendous amount of ego. His mercurial, Tourettes-like performances both help and harm his rating as he is just as likely to stray from hardline Republican orthodoxy as he is to embrace the darkness within himself.

Ted Cruz is in fourth place with a 12 percent rating. The visually repulsive candidate carries a lot of impotent rage within. But what drives his rating is more than his ability to alienate allies; a driving desire to rule the world as the leader of a radical theocratic state.

Marco Rubio rates a 10%. While he carries the same drive for power as all other candidates, his awkwardness and over-willingness to relinquish personal power to the establishment makes him more of a puppet than a master of evil.

“What should concern the Cthulhu campaign is that over the last few decades his presidential efforts have been losing ground to ever increasing amounts of corruption and blasphemous behavior,” Bates said. “Strangely, they seem quite pleased with this.”