Cthulhu has been officially nominated for a Nobel Peace Prize, according to Henriette Aasen, Nobel watcher and director of the Peace Research Cooperative of Oslo.

OSLO, NORWAY — Dread Lord, and presidential candidate, Cthulhu has more to savor this week on the campaign trail than the vulture-picked carcasses of the campaigns of Rick Santorum, Mike Huckabee, Martin O’Malley and others. Cthulhu has been officially nominated for a Nobel Peace Prize, according to Henriette Berg Aasen, Nobel watcher and director of the Peace Research Cooperative of Oslo. 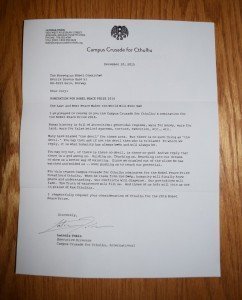 Letter to the Norwegian Nobel Committee nominating Cthulhu for the Nobel Peace Prize
Aasen told the Kingsport Star Herald that Cthulhu has been nominated, as He is yearly, by the Campus Crusade for Cthulhu (known also as CTHU). Cthulhu joins a long list of historical luminaries nominated for the coveted prize like Adolph Hitler, Benito Mussolini, Rush Limbaugh, Henry Kissinger and Vladimir Putin.

Aasen says CTHU selected the independent candidate and demon god because “when He rises from the Deep, humanity will finally know peace and understanding. Our conflicts will disperse. Our prejudices will fade. The Truth of existence will fill us. And those of us left will join as one in praise of Pax Cthulhia.”

Throughout his presidential campaign, Cthulhu has called for one final World War where America will conquer the globe using its massive military machine alongside His powerful alien allies, eat the heads of state and commerce around the world and to inspire “equality through insanity” as our “carefully constructed veneer of reality melts” before us.