It has come to our attention that MIT student James Cullen and his associate Terry White are trying to scandalize our campaign by falsely associating us with their "disappearances."

It has come to our attention that MIT student James Cullen and his associate Terry White are trying to scandalize our campaign by falsely associating us with their “disappearances.”

Terry White did contact CfA campaign manager Eminence Waite. Wanting to help a potential voter our campaign replied. We have turned that email conversation over to law enforcement. That is the only contact we have had with him.

We have nothing to hide. We have reproduced their claims below in full in the spirit of full disclosure.

Terry, I need you to upload this to as many places as you can. I don’t care what you call it, it just needs to get out there. Also post the attached pic. If you don’t hear from me in a week, delete all of my emails to you and forget you ever knew me.

I know this sounds like some slenderman bullshit or another stupid movie viral. I don’t care, just get this out there.

If you ever wondered where I go for spring and winter break, my mother lives in the Dominican Republic and I help her work the de la Renta estate. It was two years ago when an accident at the pool opened a position at the Big House. No, I don’t have a picture of the costume I had to wear. The fitting session was embarrassing enough.

The usual Christmas crew was arriving – Barbara Walters, Charlie Rose, Bill and Hillary Clinton and the rest. I was on luggage duty. Did you know Walters has a monster of a yappy dog? I almost lost a finger. So I get back downstairs to find the Kissingers had finally arrived, late as always. I get to show the old man to his room.

Whatever overpriced cologne he wears is gag inducing. I offer to fetch a cart to drive him to the villa, but he insists on loping there with his odd gait saying the exercise will work out the kinks in his bones. Whatever.

So we get to his villa on the estate and he immediately starts getting down to his skivvies and wants to go for a swim. I turned to ask him if he would need anything else… but his skin! I’ve seen pictures of skin disease but this was something different. I tried to remain professional — my mom can’t afford to lose her job here you know — but he must have seen the look on my face. He bellowed for me to get out.

As I made my way to the car port to see if there were any more latecomers, I got called to the Big House. Mom’s job was safe, but I got “demoted” back to landscaping which was fine with me.

Every so often in between planting and weeding I’d catch a glimpse of the main pool where the blotchy, lumpy form of Henry Kissinger seemed to eternally lurk. I swear that he could swim faster than an old man in his condition should.

The next year, you remember, we worked reef patrol on the Florida Keys so I didn’t go back for Christmas. Everyone was still in mourning over Oscar and they didn’t need the extra help anyway.

Which brings us to now.

I mostly work the far side of the compound away from the guests and the ridiculous servant costumes. But they needed extra help setting up for the New Year’s party by the pool.

And there was Kissinger, swimming. I tried to avoid all eye contact with him and focused on setting up the lights. I was a little too good at doing that because Kissinger had to croak twice, “BOY! Fetch me a towel.”

I did and when handing him the towel, again keeping my eyes averted, I swear he smelled like week-old fish. I almost choked and it was then I got a really good look at him.

It’s not a skin disease. You’d think it was ichthyosis but the features across most of his body were more intentional like an old man crossed with a greenish shark.

I asked if there was anything more I could do for him. He stared at me, unblinking, while he dried himself off, then loped off toward the Big House.

I finished installing the torches and was summoned to the Big House again. No reprimands this time, just another costume fitting. I was an older costume, I guess the widow wanted comedy since I looked like an octopus in a mu mu. My service assignment for the night… I was to report to Kissinger’s room.

I really didn’t want to knock on the door of his darkened villa. Maybe the old man had already wandered off to the pool.

“Come in” the old man croaked.

I opened the door slowly.

Kissinger was half illuminated by a light from an adjoining room. His fat form enveloped a wicker chair facing the door. The dim light did nothing to conceal his condition — it highlighted the loathsomeness of his figure. The folds of his jowl moved up and down rhythmically as if he were breathing through them. The network of odd scales and fins across his hairless, naked body was grotesque.

I took the chair furthest from him.

“The ocean. You love it, do you not? They tell me you study it. That is good. It sings to me. Dreams of the future. Messages from my god. He tells me it is almost time to take my place at his side in a future that I helped Him build.”

His usual croaking had deepened; his breath rasping.

“But not yet.” He arose from his chair but not without some effort. “I hunger.”

He began limping toward me. I sat there stunned this was even happening, but some part of me thought to take out the tool knife in my jacket pocket.

The fish stench from Henry Kissinger was overpowering, but as he got close I struck. Only to have my hand caught mid-swing. A blow buckled my chest, breaking ribs. He lunged again. I managed to put the chair I had been sitting in between us. He raised his scabrous arm for another strike, only the demolish the chair as I flailed toward the door.

He started yelling in, I guess, German – hard to tell with that thick guttural voice of his. Ribs hurt like hell, but thankfully he was truly unable to walk faster than his lopsided hop would allow. My wincing gait was faster.

I’m glad I worked the estate grounds – I knew where all the cameras were. I could hear the calls of estate security searching as I slipped onto the street bordering the property. My mom! I needed to get to her. To tell her… what? Henry Kissinger is not just a figurative monster but a literal one? That’s just not..

My phone began vibrating. The number was the estate’s. I ignored it and jogged best I could toward my mother’s house.

And that brings us to now. Mom and I are staying at Aunt Martine’s until we can get out of the country. When I told her what happened she didn’t laugh. She knew. She had always figured a day like this would come. That’s why I worked the outskirts of the estate. She insisted I work there to protect me.

Mom told me a lot more: about things called Deep Ones, strange parties and even stranger songs sung, and a secret Kuh’tulu cult that is basically the Illuminati. I’ll type more once we get somewhere civilized in Haiti.

And remember to post this if you don’t hear from me, slacker.

Terry, I made this quick sketch based on my encounter with Henry Kissinger. Maybe urban legend Reptilian? Maybe something else? 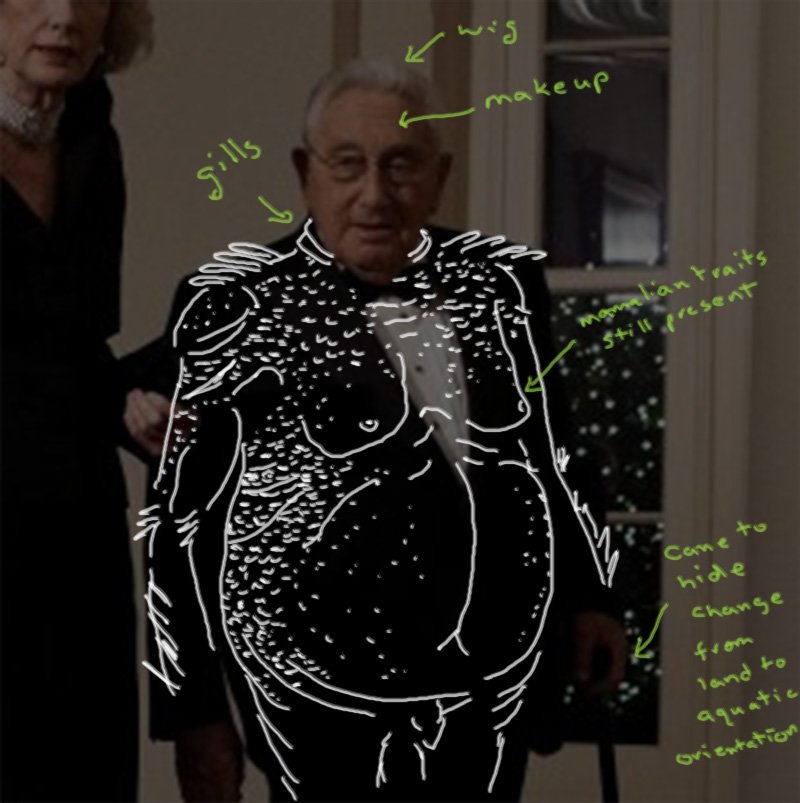 For anyone reading this, my name is Terry and my friend has gone missing. Either in the Dominican Republic or Haiti.

I haven’t heard from James in weeks and all I have is the previously posted bullshit email. His phone has been disconnected, Netflix deleted. And yesterday the landlord at this apartment sold off his stuff to pay for “missed rent” (which is bullshit because whenever he goes off he at least pays one month ahead).

His disappearance goes beyond the usual practical joke, so I’m going to pretend this is all legit and maybe someone reading this can tell me how nuts I am.