While Blumenthal specializes in obtaining classified documents on the sly, Podesta's great love is for extraterrestrials.

Dread and Revulsion on the Campaign Trail ’16 excerpt, by Beretta Nova

One of the more humorous revelations from Wikileaks is the chest-beating contest between Hillary Clinton’s Inner Circle sycophants John Podesta and Sidney Blumenthal. Both men are at the center of the greatest conspiracy in human humanity, yet can’t help themselves slapping each other over their pet fringe projects.

“Sid is lost in his own web of conspiracies,” Podesta wrote on January 1, 2016. Pot meet kettle. While Blumenthal specializes in obtaining classified documents on the sly, Podesta’s great love is for the extraterrestrial occult. He seems to favor the rantings of former astronaut Dr. Edgar D. Mitchell, which appears to be a mix of Star Trek utopianism, new age hoodoo, and Mister Rogers.

The real alien intelligence, like that driving the Cthulhu campaign, enveloping us is nothing like that. One email released today by Wikileaks (#PodestaEmails19) may show he is not such a blind dunderhead after all.

On March 21st, Podesta emails Cthulhu campaign manager Eminence Waite, who appears to have a history with him. He asks, in the event of a Cthulhu win, if he could have his brain extracted instead of spending the end of time in the presence of his employer, Hillary Clinton.

The “Yuggothians” he mentions are a bizarre fungoid race known as the Mi-Go. Ask anyone on the dark web and you’ll be told they have several colonies throughout the world, including Vermont. Reportedly modern encounters with them show they have a penchant for making test subjects of primitive species by placing their brain in a self-sustaining cylinder. They may also have been instrumental in removing the “giant meteor” problem from this election.

To her credit, Eminence rebuffs him, letting Podesta know that “choices have consequences.”

Interestingly, a couple weeks later, the Clinton campaign threatens to release all government records relating to alien activity. I guess hell hath no fury like a grand vizier scorned. 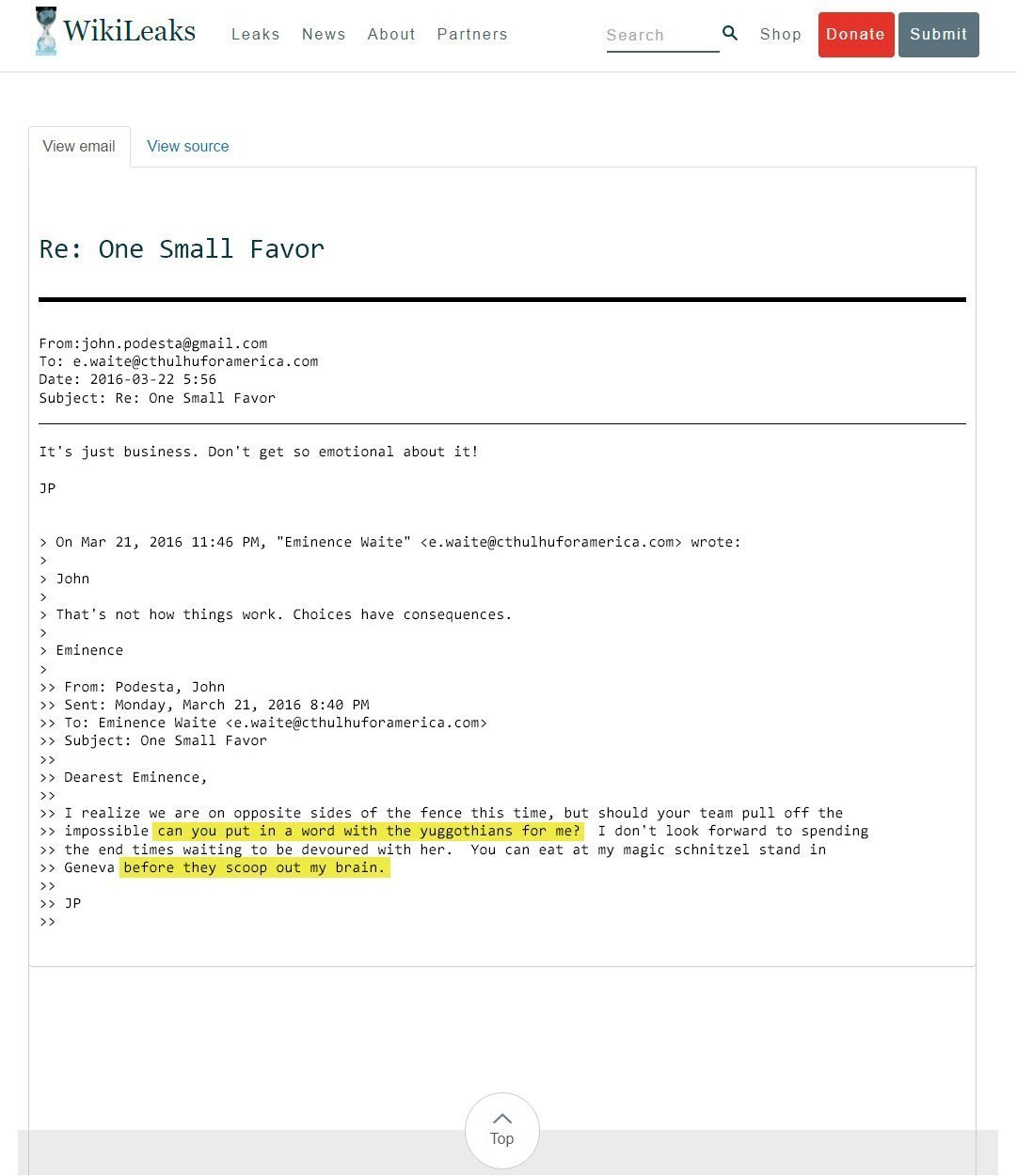